With a budget of less than Euro 75,000, the Fundación EcoAndina introduced Solar Mobility in the Andean Highlands of Argentina. The project was realized between July 2014 to December 2015.

As a small Argentinian NGO, Fundación EcoAndina is committed to ecological and social issues. Over 20 years, EcoAndina has developed the Solar Andean Village concept, where solar energy is used for cooking, heating water, heating schools, water pumping, mobility and electrification. More than 20 Andean communities in the Argentine Highlands have already transformed into Andean Solar Villages.

This project aimed to introduce and test electric bikes (e-bikes) and electric motorcycles as mobility options for short and medium distances in the Andean Highlands of Argentina (Puna region and San Salvador).

Mobility in this region of Argentina is limited due to inadequate public transport, fuel shortages, high fuel costs and a deficient road network. It takes a long time to travel even a short distance and travel costs are high for local communities. The maximum daily distance that inhabitants in the rural Puna area need to travel to carry out economic activities such as farming, construction and gold-panning is 30 km, so electric vehicles must be able to last this distance before requiring recharging.

Solar mobility is a step on the pathway to replacing the use of fossil fuels in the Puna region. Due to the area’s abundant solar energy and lithium resources, EcoAndina is particularly interested in combining solar mobility (e.g. e-bikes) and other solar energy concepts with the development of the local lithium extraction and processing industry.

In this project, 15 e-bikes were introduced to the participating communities and tested by the local population for short and medium distances. The energy for recharging the e-bikes’ batteries was provided by six mobile solar PV power stations.

The project comprised two main phases. In the first phase, 15 specially designed e-bikes were assembled and tested by staff to ensure they were suitable for use in rural areas and were easy to maintain. The e-bikes were equipped with 350 W and 500 W motors, at first with heavy lead batteries and later with light lithium batteries. The e-bikes were provided to various organisations in three different areas of the province of Jujuy. Furthermore, five German-manufactured mobile solar battery charging stations were installed in accessible locations, each one consisting of a regulation unit connected to a 65 W PV panel.

In the second phase, a stock of spare parts was amassed and five men from the participating communities were trained in e-bike construction and maintenance to ensure the long-term sustainability of the project.

In this prototype development and testing project, the WISIONS of Sustainability initiative provided initial financial support to make the e-bikes available on loan to the users at no cost.

The average cost of an e-bike for the duration of this project was around Euro 2,300. Since 2016, the import trade has become less restrictive and prices for e-motors, regulation components and lithium batteries have dropped, leading to potential cost reductions of over 20%. Additional future cost reductions are expected through large-scale bike production, the development of locally-manufactured lithium batteries and access to microcredits.

A journey of 30 km by pick-up truck (a common practice in the region) costs approximately Euro 5; fuel costs for an estimated 200 journeys of 30 km per year would amount to Euro 1,000 per year. Therefore, a simple projection suggests that investing in an e-bike could have a payback period of two to three years.

The major impact of this project was the breakthrough in introducing an innovative technology into a challenging environment. On this basis, a local entrepreneur, in cooperation with EcoAndina, has applied for finance to support the commercial production of e-bikes. EcoAndina itself is planning follow-up projects with the aim of improving the performance of the e-bikes and lowering their cost. The current price is likely to be too high for the indigenous population, who tend to have low incomes.

In this pilot project, the e-bikes were very well received by users and there were a broad range of user types. At various dissemination events, the e-bikes were demonstrated to over 500 people and a hundred of these, including several decisionmakers (e.g. local mayors and Members of Parliament), experienced e-bike rides. One central difficulty for further diffusion is the strong market competition from extremely cheap, fuel-powered motorbikes, which have been growing in popularity over the last decade in rural regions of Argentina.

Valuable lessons have been learned. For example, trial and error showed that it was more expensive to adapt secondhand bikes than to work with newly-bought components. It also became clear that substantial research, development and demonstration efforts are required to customise e-bikes for the harsh conditions and terrain of the mountain tracks in the Andes. 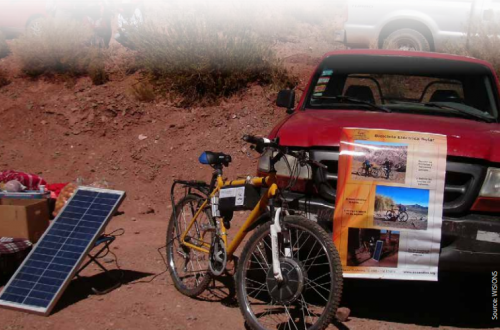