University of Southampton - Installation of two mini-grids with 13.5 kWp capacity each (Uganda)

The University of Southampton is ranked among the top 100 universities globally and top 15 in the UK. The University is a research-led founding member of the prestigious Russell Group and have a community of over 7,450 international students from 130 different countries.

Prior to this project intervention, as per the survey, the villagers were dependent on kerosene lamps for lighting and diesel generators for other electrical power needs. These marginalised communities only had very limited seasonal income related to farming and thus represented only the primary tier of electrification. There are no plans for the national grid to be extended to the region in foreseeable future.

At the initial phase, surveys and consultations with the local communities were made. Based on the information collected, PV-battery systems were designed to deliver 28 kWh/d electricity in each village and although initial demand was low (~6.5 kWh/d), demand grew rapidly over the next years, exceeding the design capacity.

The power plant was funded from the grant, while the electrical distribution network was funded by the government agency responsible for rural electrification. The cost of the fully installed and commissioned power plant (PV system, balance of system, protection, and batteries) was around 4,120 EUR.

Over 144 businesses, two health centres and two schools have been connected to the two mini-grids, providing access to energy for lighting, refrigeration, electronic devices and battery charging from 2015 until the present. Through ongoing surveys, there is clear progress in health, education and commercial services etc within these villages. Six full-time and two temporary employment opportunities were created as part of this project.

Demand grew very rapidly after commissioning, driven partly by a low regulated grid-parity tariff and by a desire for high-intensity inefficient security lighting. This required an intervention to replace the lighting with low energy units to prevent the system from being overloaded. Demand slowed but continued to rise and eventually, the design capacity was exceeded, and the batteries began to fail, resulting in blackouts. Upgrades are currently planned with REA, incorporating diesel backup and lithium-ion batteries for increased resilience. Survey work has been carried out in several neighbouring villages in collaboration with REA to assess the potential to establish a cluster of mini-grids in the area. 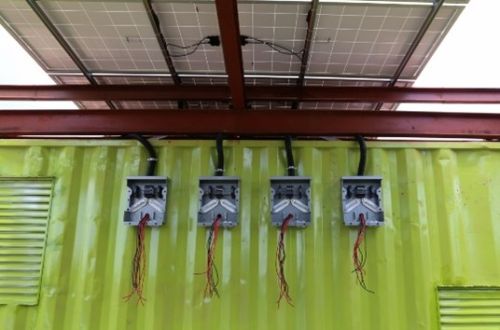