Mlinda is an operational NGO that works in ecologically sensitive and highly underdeveloped areas to reduce environmental degradation, by implementing projects that reduce GHG emissions, promote environmentally positive goods and reduce consumption of environmentally negative goods. Mlinda has it\'s Head Office in Paris and it\'s India office in Kolkata. Mlinda\'s flagship project is the rural electrification project based on renewable energy in the States of Jharkhand and West Bengal. Mlinda has till date (March 2016) installed 310 pico and micro grids connecting 2750 homes,two village bazaars,85 village shops and three school hostels. The micro grids vary in size from 150 W connecting 6 houses to 8 KW connecting a bazaar with 25 shops, a boat repair yard, a jetty and 55 homes.

Mlinda is presently on a ARE assisted project developing three village sized mini grids of 20 KWp each connecting 250 homes, 50 small businesses, productive loads such as paddy hullers and irrigation pumps. Mlinda also works with women groups in these villages to incubate village enterprises. Mlinda is extending the ARE project to cover ten villages with productive power as anchor loads with installed capacity of 210 KWp supplying AC power with solar PV and solar-wind hybrids with smart energy meters.

In rural India, the government-run health centres are the primary health care delivery mechanism for immunisation, postnatal care and prevention and control of infectious diseases. In the State of Jharkhand, there are over 550 health care facilities, of which 92% are in villages. A health centre normally has a load ranging from 1 to 5 kW, depending on size and appliances. Daily energy consumption ranges from 2 to 12 kWh. The health centres require reliable and good quality electricity to power baby warmers, refrigeration for vaccines and drugs, as well as the equipment needed during child births and minor surgeries. These villages are connected to the Electricity Distribution Company (DISCOM) grid but the supply is not reliable and the voltage tends to fluctuate. This can easily hamper the operations of the health centres, preventing them from functioning efficiently and to its maximum capacity, thereby obstructing poor people’s access to basic health care facilities.

Mlinda works in the rural district of Gumla in 40 villages, providing 24/7 three-phase electricity for domestic, productive and commercial loads through DRE-based mini-grids. Energy storage was enhanced through lead acid gel batteries with a battery bank capacity of 48 V, 2,000 Ah and the grids were also set up with a 15 kVa diesel generator for peak load management. The average solar PV plant size was 25 kWp, with an inverter capacity of 30 kW. The connected customers were provided with smart prepaid meters with different tariffs for day and night usage. The grids primarily power productive loads for livelihoods. They also power domestic appliances and institutional loads such as banks, ATMs, post offices, schools, hospitals and health centres.

Mlinda mini-grids power health infrastructure in four villages: a 10-bed hospital at Phori village, a health centre at Patia village, private clinics and pharmacies at Kashira and Murkunda villages. The Phori Health Centre/Hospital caters to 13 villages of the Phori panchayat, reaching 1,950 families and 10,000 people in total. It takes two to three months to develop a whole project for one village. One organisation can implement a project involving 20-40 villages in one year by simultaneously working on a large number of villages. Inception to commissioning is normally four months to one year, depending on the size of the project.

The total cost of the project was EUR 5 million, with a proportion of equity (45%), debt (10%) and grant (45%). The DRE system is owned and operated by Mlinda. Mlinda follows a Build Own Operate (BOO) project model. Mlinda operates and maintains the grids for a minimum of 20 years. The consumers pay upfront connection fees and then pay for energy usage through pre-paid metres. Local operators are also trained in maintenance and repair of the mini grids. For long-term sustainability, the project needs to both be commercially viable and bring about positive socio-economic outcomes for the communities. To achieve this, Mlinda invests in productive demand growth that spurs economic development and provides reliable and good quality power 24/7 along with repair and maintenance support. To do this, Mlinda organises peer interactions with satisfied entrepreneurs and provides business advisory, product finance and linkage to external markets.

Mlinda is in the process of introducing a large number of small loads (“swarm” loads) that are productive and will result in a more even distribution of livelihoods and a greater gender diversity amongst entrepreneurs. In order to scale up Mlinda’s complex model, the organisation needs to create tools and knowledge products to support its internal staff as well other companies/organisations replicate the system. Mlinda is currently preparing to scale up and replicate its model in 100 villages in India by 2023, as well as assist with their replication to other organisations by training core teams and management and sharing technical, microbusiness models and community engagement techniques in other geographies such as Nepal, Myanmar and Ethiopia. 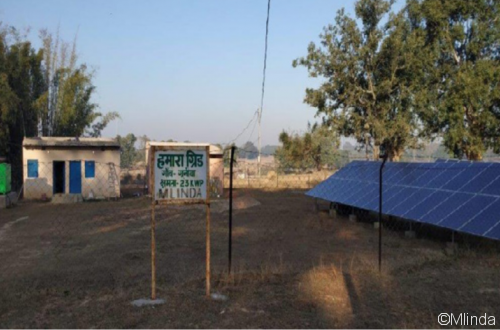