Starting in 2015, ACCIONA Microenergia Foundation works in the Peruvian Napo basin with solar home systems giving light to rural households. Total budget (up to now) has been Euro 370,000.

ACCIONA Microenergia is the corporate foundation of ACCIONA, one of the foremost Spanish companies, leader in the development and management of infrastructures, renewable energy, water and services. The ACCIONA Microenergia Foundation channels ACCIONA’s activity of bringing basic services of energy, water and sanitation to remote communities, by driving development cooperation projects; its rural electrification programs “Luz en Casa” provide more than 46,000 people in Peru and Mexico with affordable, modern and safe electricity by means of solar home systems

The objective of “Luz en Casa Amazonia” is to give an electricity delivery model, which is based on the user participation, the shared responsibility and the multi-stakeholder partnerships, which is adapted to very complex settings, and which applies the most advanced clean technologies, to communities living in the Peruvian Napo basin. Thus, both the development of those communities and the protection of the Amazon environment are promoted.

“Luz en Casa Amazonia” brings electricity to low-income communities living in remote sites of high ecological value, with exclusively fluvial access, and extremely hot and rainy weather. Those conditions imply very complicated logistics that, together with the low power demand levels of those communities (about 3.6 kWh monthly per household), have made it technically and economically unfeasible to connect to the national grid. “Luz en Casa Amazonia” overcomes those problems.

The electricity delivery model implemented with “Luz en Casa Amazonia” is based on the technology of the third generation solar home systems, which have no pollutant elements, are easy to transport, install and maintain. The 3GSHS ousts damaging pollutants elements provoked by diesel generators, oil lamps and candles that are used by people without access to electricity services.

The plug & play architecture of the 3GSHS allows anyone to install it after a basic training. Thus, ACCIONA Microenergia Peru trains users to install it, as well as to use it correctly, meet the payments of the fee for service, and log in the code to unblock the PAYG to have electricity. Payments can be made through the Photovoltaic Electrification Committee, the body promoted in every attended community to represent it in the management of “Luz en Casa Amazonia”. Users can also pay directly in the Customer Service Centre (so called CAU) installed in a reference locality, as a branch to collect payments, offer repair services and sell electric devices. This CAU, which is managed by local personnel specifically trained, guarantees the technical sustainability of the initiative

So far, “Luz en Casa Amazonia” comprises two projects with a total investment of Euro 370,000. Those funds come from the subsidies of the National Fund of Scientific, Technological and Technological Innovation Development of Peru (FONDECYT) (10%) and the Spanish Cooperation (54%), as well as from ACCIONA Microenergia (30%) and other partners (6%). ACCIONA Microenergia has plans to continue scaling up the action, probably with additional funding from FONDECYT, so as to serve 1,000 users and then being self-sufficient to cover operation & maintenance activities and recover its investment, with the incomes from the fee of S/.30 (Euro 7.75 approx.) collected from users every three months.

Since February 2017, 325 people (61 households), who are beneficiary of the pilot project in the Napo basin, use the electric lighting provided with the 3GSHS of “Luz en Casa Amazonia” for an average of six hours daily. The main uses for that lighting are study (67%), work (43%) and preparation of meals (21%). Many families have left the use of alternative lighting elements such as torches (79%), oil lamps (30%) and candles (25%), whose smokes and insufficiently intense lighting provoke eye and lung diseases. There is also a positive environmental impact, by avoiding the use and uncontrolled disposal of batteries, as well as the emission of CO2 . In addition, users have reduced their energy expenditure (average of 50% approx.).

Now, a new project is being performed to extend the activity to 350 additional households in the Napo basin, by means of installing 3GSHS and hybridizing some existing diesel generators with photovoltaic installations.

In addition, ACCIONA Microenergia is part of the conversations to include the rural electrification with 3GSHS in the Peruvian regulatory framework, so as to have a social tariff that could guarantee the affordability and economic sustainability of the service given with that technology. That would accelerate the replication of this delivery model in many remote communities, such as those in the Amazon basins. 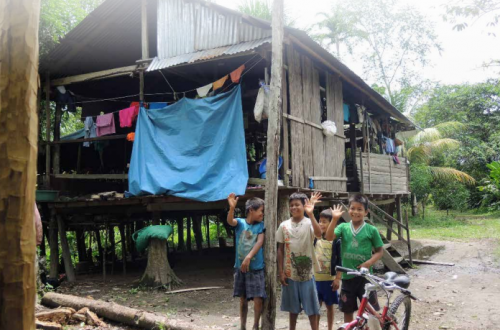