The objective of the “Luz en Casa Oaxaca” program is to bring an affordable, feasible, sustainable, basic electricity service to the most remote, low-income households of the State of Oaxaca (Mexico), out of the forthcoming utility (Comisión Federal de Electricidad) plans of electrification. According to the data given by the Government of Oaxaca, in 2010, there were almost 50,000 homes without access to electricity, of which 55% were in regions of priority attention due to rural poverty and high population dispersion, and around 9,000 were in villages with less than 100 inhabitants.

“Luz en Casa Oaxaca” brings electricity to households in rural communities with less than 100 inhabitants, of which the majority come from the indigenous population (Oaxaca is the Mexican state with more ethnic groups). Their households are scattered over the territory and have a weak infrastructure of communication. All that complicates their access to basic services and contributes to their isolation, inequality and lack of opportunities for development. The electricity service offered with Luz en Casa Oaxaca mitigates that situation, and pays attention to the long-term sustainability of the project.

The electricity delivery model implemented with “Luz en Casa Oaxaca” is a public private partnership for development (PPPD). The technological model is based on third-generation solar home systems, which have no polluting elements, easy to transport, install and maintain, and also provide an alternative for damaging technology such as diesel generators, oil lamps, candles that are used by people without access to electricity services

The ACCIONA Microenergia Foundation – through its local organisation ACCIONA Microenergia Mexico, which implemented “Luz en Casa Oaxaca” on site – supplied third generation solar home systems (3GSHS) including one 25 W panel, one integrated lithium-battery & controller, two LED lamps, one torch and connections for high-efficient 12 VDC devices, in order to give an affordable, basic electricity service to remote, low-income communities. The plug & play architecture of the 3GSHS allows anyone to install it after a basic training. Thus, ACCIONA Microenergia Mexico trains users to install it, as well as to use it correctly. During the program development, a Photovoltaic Electrification Committee has been promoted in each attended community - mainly for representation and dissemination purposes. In addition, to offer repair services and sale of electric appliances, a Supply & Service Centre (so called Centro Luz en Casa) was installed in reference localities serving about 1,000 households. These centers, which are managed by local specifically trained personnel, guarantee the technical sustainability of the initiative and promote entrepreneurship on renewables

“Luz en Casa Oaxaca” implies a total investment of Euro 2.5 million or Euro 330 for every 3GSHS installed. The alliance had enough technical, managerial, institutional, and economic resources to implement the program. The Government of Oaxaca State contributed with 30% of the investment, the users paid another 30%, and the Spanish Agency for International Development Cooperation (AECID) and ACCIONA Microenergía contributed with 20% each. Those users with the lowest income had access to one-year micro loans, which were crowdfunded through the NGO Kiva. The user fee was less than the previous alternative energetic expenses.

Since December 2013, 30,000 people (more than 7,500 households) have had access to the electric lighting provided with the 3GSHS of “Luz en Casa Oaxaca”. They represent almost 30% of the houses electrified in the last 6 years in Oaxaca (70% of those electrified with non-conventional methods).

Every year, the beneficiaries have access to more than 11,000,000 hours of electric lighting, of which 4,750,000 hours are used for additional activities, saving Euro 800,000 in energy, and six Centros Luz en Casa were set up for technical services (three of them managed by women). There is also a positive environmental impact because batteries were no longer needed (13.3 tons), contributing to CO2 savings of 1,200 tons. 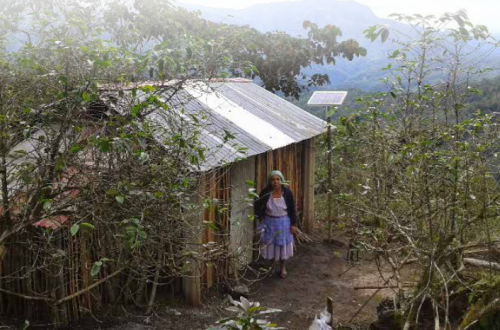