Ensol Tanzania Ltd was established in 2001 with the purpose of supplying, installing and maintaining photovoltaic products and systems in Tanzania. It is now one of the renowned solar suppliers and Class I contractors of solar energy systems in Tanzania. Ensol has also twice been named one of the top 100 mid-sized companies in Tanzania, in 2011/12 and 2012/13. Ensol employs 17 permanent staff and over 30 technicians on a contractual basis.

Tanzania has one of the lowest access to electrification rate in the world with only 24 % of the entire 45 million population accessing electricity. About 70 % of Tanzanians live in rural areas where electricity access is a mere 7 %.

Mtwara Rural is a location in Tanzania where access to clean water and electricity is poor and poverty in the area is extreme. Energy access in the area could improve standard of living, the provision of health and educational services and more importantly catalyse economic activities in the area.

Due to high cost of installing grid lines, the best alternative to electrify rural Tanzania is through renewable energy technologies, particularly solar energy. Although lighting small businesses like shops and restaurants has traditionally been the main application of such renewable energy technologies, the solar energy is also used in phone charging centers, video shows, small machines (carpentry and milling machines), hair cutting kiosks and water pumps for irrigation and community usage.

The project was implemented in 2012 - 2013. All 11 villages in Mtwara Rural, a region in South of Tanzania, were supplied with a solar water pumping system capable of supplying a maximum of 50,000 litres of tap water per day. The minimum water pumping head was 100 m and in some villages, water was transported from the source to the village over a distance of 1.9 km. A water committee in each village is responsible for collecting small contributions from residents to sustain the project.

The 340.000 USD project was financed by the European Union and administered by African Medical and Research Foundation (AMREF). Procurement was conducted through open competitive tendering.

Residents of ten villages are still enjoying tap water three years after the completion of the project. As a result of the success of the project, the government has notified all district councils in Tanzania to put in place plans to ensure that all diesel water pumps in Tanzania are replaced with solar pumps. 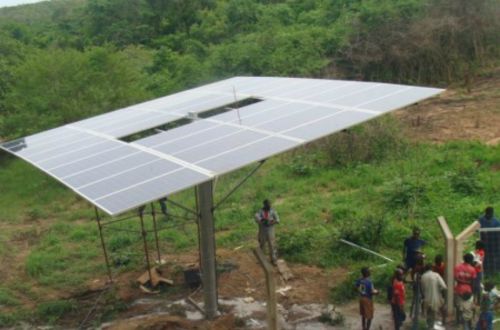