The reason for using Studer power electronics is the versatility of the resulting systems and the guaranteed functioning at altitudes exceeding 4,000 metres above sea level. Also, in Chile the after sales service on Studer equipment is very good.

Visviri is Chile's northernmost village, situated close to the Bolivian border, at more than 4,000 metres above sea level. To stimulate the self-sustainability by improving energy access to communities far away from conventional energy sources, Visviri's Centre for collection and processing of camelid fibre (for example Alpaca) was equipped with a solar hybrid micro-grid as part of the 5-year "Ayllú Solar" project, originated by the Chilean Solar Energy Research Centre, SERC.

A 26.4 kWp hybrid solar micro-grid system in three-phase with 2,260 Ah in storage and three Studer inverter/chargers of 8 kWp was set up. The simple and robust system has 10 single-axis solar trackers forming the three-phase line allowing for a production without interruptions and backup in case of natural disasters. Remote monitoring of the system guarantees its optimised operation and life expectancy.

To save system costs the electrical solution was designed to fit inside a container, pre-assembled in a bigger city and then sent to the final destination. The modular design and adaptability of containerised solar systems makes them ideal for any electric project in rural areas.

The system consisted of:

SERC's aim is to promote viable and cost-effective projects among the Chilean population in the Arica and Parinacota region that encourage large-scale use of solar energy, a resource in abundance in northern Chile. They are funded by the BHP Billiton Foundation,who works to address some of the most critical global sustainable development challenges.

Today 100% of the centre's electrical production is powered by solar energy and their production capacity is improved. As local workerswere integrated in all parts of the project, from conception and design to execution, the community know how to operate the system themselves and have trust in the technology. SERC hopes that these positive results will help improve the people's confidence in renewable energies and one day transform Arica-Chile into the sunny capital of South America. 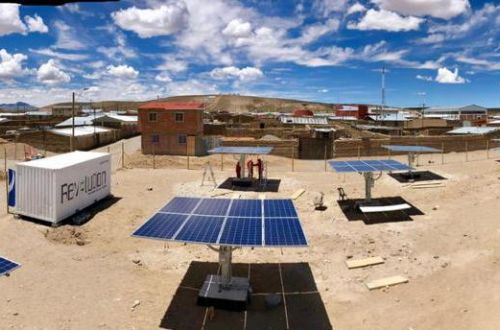