To improve the living conditions in the rural communities of Latin America's eight most disadvantaged countries through the use of renewable energy. To help the inhabitants to fight against poverty, isolation and marginalisation resulting from their socioeconomic conditions.

The EURO-SOLAR Programme helped the communities through the installation of kits that provides electricity, communication facilities in form of computers, an internet connection and a projector and health care devices such as a refrigerator for medicine and a water purifier.

Most of the beneficiary communities (70%) opted for a solar energy system. The consistent wind in Bolivia and in Peru, led these countries to choose mixed solar-wind systems. 12 Gel batteries store the energy for access to electricity around the clock. A control panel monitors and manages the electricity storage and directs the power to the facilities.

This project used a participatory approach where the communities has to cover the expenses for the operation and maintenance of the equipment included in the EURO-SOLAR kit. For that reason the system has been designed to be user-friendly and its equipment carefully selected for its robustness, reliability and ease of repair.

The total budget was 36.4 million Euros, co-financed by the European Union (80%) and the national governments of the beneficiary countries (20%).

At the end of the EURO-SOLAR Programme 600 power-generation kits had been installed providing electricity, based exclusively on renewable energy sources, to over 300 000 people in 600 rural communities in Latin America previously without access to electricity. 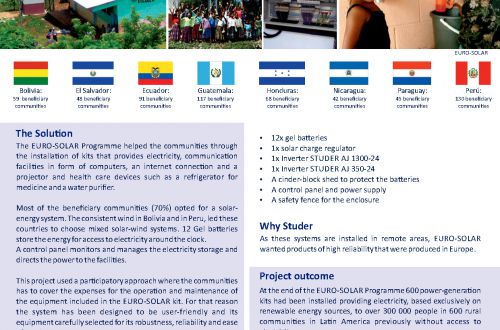