Hochschule Neu-Ulm University of Applied Sciences (HNU) is a young and rapidly developing Business School with around 4,000 students. The Bachelor’s and Master’s programmes are strongly grounded in practical application of academic theory. HNU is in the process of internationalisation and therefore it runs interdisciplinary projects in several African countries.

The GDP per capita in Ethiopia is roughly 350 USD, which is considered as poor in a global context. 85% of Ethiopians live in rural areas in impoverished conditions. Furthermore, only 15% of Ethiopians have access to a reliable power source. On the other hand, the effectiveness of governmental institutions can be regarded as highly developed. In addition, the country showed double-digit GDP growth rates in the previous years.

The unique combination of a relatively stable political environment and a large potential for decentralised electrification produces a rare opportunity for creating business models based on renewable technologies.

In this light, the developed business models were expected to incorporate the following characteristic features:

One of the most appealing business models developed by the students is the foundation of a company producing and selling solar wagons in Ethiopia.

A solar wagon is an assembly of a small-scaled PV system which provides mobile electricity based services. Examples include photo studios, hair salons, cafeterias and charging stations for mobiles. Prototypes of the solar wagon were successfully tested in the rural area alongside Arba Minch, Ethiopia. Currently the students are looking for an investor to found a company producing solar wagons in Addis Ababa and distribute them to rural areas in Ethiopia. According to the students’ business plan, a starting capital of 30,000 EUR is needed to produce 180 solar wagons per year. Based on an assumed retail price of roughly 1,100 EUR, a profit margin of around 35% can be achieved.

The project is funded by the German Federal Ministry for Economic Cooperation and Development (BMZ) and carried out by the German Academic Exchange Service (DAAD) within the programme ‘Praxispartnerschaften 2013’. It will run from September 2013 until December 2016. The total project volume including monetary payments and payments in kinds of the universities and industry partners amounts to 500,000 EUR.

The project shows how locals with an academic background in developing countries approach the challenge of entrepreneurship. With access to electric power, a positive regional economic development should be initiated, especially if the new resources are used for productive use. Thus begins a self-accelerating effect. More locals will have and use electricity, enabling employment and causing other entrepreneurs to follow suit. Furthermore, better access to communication technology will stimulate local economies by allowing for more efficient agricultural trade, higher quality education, and exposure to small business ideas and trends. 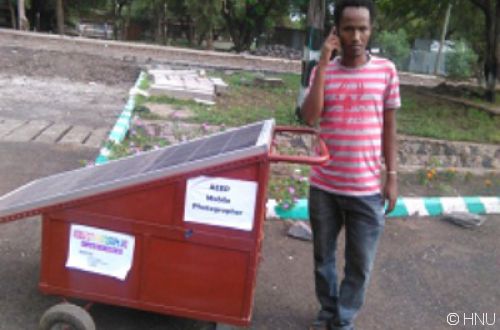