Tsumkwe is 735 km away from Windhoek and 304 km from Grootfontein and, therefore, very rural. Based on Namibia’s Rural Electricity Distribution Master Plan (REDMP), Tsumkwe is considered an off-grid area and will not be connected to the grid in the near future. The electrical infrastructure in Tsumkwe has its origin in Namibia’s pre-independence period. Back then, Tsumkwe served as a military post established by the South African government to control Namibia. A micro-electrical grid was installed during that time, complemented by two diesel generators. After Namibia’s independence in 1990, the government funded the construction of a school, a clinic and a police station for the community and the population continued to use the infrastructure left behind by the South African Government. However, due to rising diesel costs, electricity supply has been limited, which has had a negative impact on the daily life of the local people.

Eventually in 2005, the Councilor of Tsumkwe called for an improvement of the electricity situation. Hence, between 2008 and 2012 a project was executed by the Desert Research Foundation of Namibia (DRFN) to install a solar–diesel hybrid mini-grid. Operation and maintenance of the mini-grids was under the responsibility of the Department of Works residing in Tsumkwe. The higher availability of electricity supply indeed positively affected the community. Apart from an increasing number of public services, such as streetlight or a petrol station, small businesses were able to flourish. The diesel consumption for electricity generation, moreover, was reduced. On the flipside, other challenges occurred. An economically viable operation was not possible and the systems equipment was not well maintained. Furthermore, people were regularly affected by power shortages and still were just able to consume a limited amount of power. In 2017, ownership was transferred to CENORED, a regional electricity distributor responsible for the central region of Namibia, along with the responsibility for the operation, maintenance and possible expansion of it.

However, the situation has not necessarily shown any significant progress, which is why the PROCEED project was initiated in 2019 to investigate the situation and provide support to CENORED so that the mini-grid can be managed in a profitable and sustainable manner.

Within the project, a satellite system with 30 kWp PV capacity and 15 kWh storage capacity will be installed.

Fund of 1,246,892 € received from the German Federal Ministry of Education and Research (BMBF)

At present, the technical status of the mini-grid system has been documented in detail. Furthermore, data was evaluated that support the design of an additional satellite system with 30 kWp and additional storage capacity of 15 kWh. The decentralised expansion through the satellite system particularly aims at increasing the stability of the existent mini-grid and thus ensuring a more reliable power supply. Interviews with community members have been conducted to better understand the situation of the people, particularly with regard to the reliability of the system and the affordability of the tariffs. The results will support the possible development of a new tariff model to be combined with measures that further improve energy efficiency among the population in order to reduce peak load in the long term. For this reason, a monitoring app will be introduced to help users understand the monetary long-term effects of purchasing energy-efficient appliances versus less efficient ones. A profitability calculation was moreover conducted to ensure the system's sustainability continuation, complemented by the design of income-generating opportunities and capacity building among communities. One possible solution to increase profitability is the key-maker model, in which the operator establishes a key customer that uses raw material from the community to process it with electricity from the mini-grid and eventually sells the final product to urban customers. The feasibility will be explored as the project progresses. 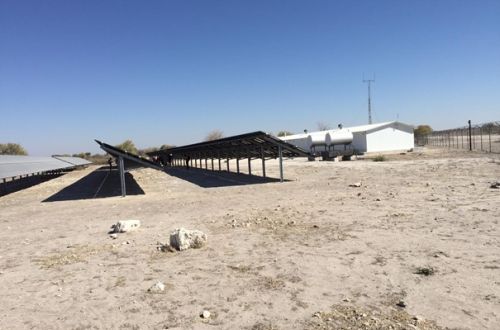