Gham Power Nepal Private Limited  is a renewable-energy focused social enterprise based in Kathmandu, Nepal. Having installed over 2,500 solar projects that cumulatively generate 2.5 MW of electricity, Gham played its part in urban electrification and soon after shifted focus to under-served rural markets by 2013.

CMCTH is one of the biggest hospitals in Nepal. It consumes 1.6 million kWh energy per year and spends EUR 250,000 annually to cover utility energy costs. Nepal’s utility grid is unreliable and the diesel generator backups previously used by CMCTH increased energy costs and carbon emissions. At the beginning, it was difficult for the hospital to afford the upfront system cost. Local banks do not have an appetite for long-term financing of such projects, so an innovative financing model was developed, allowing CMCTH to not make an initial outlay to fund the project but pay for energy usage under a PPA contract instead.

The system installed at CMCTH is grid-tied and consists of 200 kWp solar panels with a 175 kW inverter. The system is owned by Gham Power, which also provides reliable after-sales service for the entire project period through local operator partners. CMCTH provides people with many health services such as X-rays, surgeries, ECGs and 24/7 emergency services. The additional solar energy provided by the solar PV system works as a backup to help the hospital provide its services more effectively, even when power cuts occur, while reducing CO2 emissions.

The total budget of the project was EUR 125,000, funded entirely by Gham Power and leased to CMCTH under a PPA contract at EUR 0.09/kWh. The installed system at CMCTH applies the OPEX model, allowing customers to install solar without any initial investment. The rate of the PPA is lower than Nepal Electricity Authority’s (the national utility) rate. Gham Power owns the system for 15 years, during which CMCTH will pay back Gham Power. After those 15 years, the hospital will legally own the system and get access to solar electricity for 10 additional years. The system has helped reduce the daily load by 800 kWh throughout the year.

To ensure the long-term sustainability of the project, the Gham Power organised training programmes for local operators, and it currently provides its customers with a reliable after-sales service for the entire project period of 15 years. The trainings were provided to teach the staff of the hospital to handle general issues in the system, such as restarting the system in case of malfunction. The ultimate goal of the trainings was to ensure the provision of quick-response services combined with remote support. These services are managed locally by Gham Power, which supports its local staff on the ground and they include: cleaning of solar modules, checking the voltage on the PV combiner and all metre readings, as well as technical support in case of system failure.

CMCTH employs more than 1,400 people and provides services to approximately a quarter of a million people annually, with more than 1,500 patients. The installed system can power critical medical equipment like ECG, anesthesia and radiography machines, etc. After its installation, the PV system has been estimated to save 196 tonnes of CO2 emissions per year. Gham Power also estimates that the system will help save EUR 175,000 over the project lifetime, thanks to a reduction in the overall cost of electricity, as the solar PPA price is more competitive than that offered by the national utility, as well as a decrease in diesel consumption.

While energy supply is critical for health institutions, the cost incurred is relatively high in order to maintain a consistent supply. Solar is a good solution, but the financing model needs to be worked out. If the financing term is sufficiently long (more than 10 years), solar power can be used to provide electricity to health institutions at a cost that is cheaper than the national grid’s tariff. Furthermore, digital tools can be vital in measuring system performance, predicting failures and responding to any technical faults quickly when delivering solar solutions to institutions in remote locations. 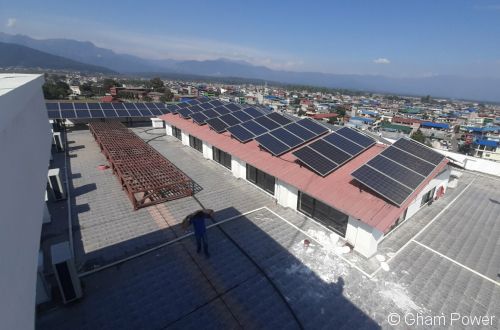