Alina Enèji is a Haitian project developer. Their focus has been on providing clean, reliable and affordable electricity to last-mile areas of Haiti, and their ambition is to scale energy access across the nation with the combined support of local communities and institutional stakeholders. Okra Solar is an Australian technology supplier specialising in the design and production of interconnected decentralised energy systems (known as “mesh-grids”) for last-mile communities.

Dulagon is a remote rural village in the Artibonite department of Haiti;  a country with a ~46% electrification rate. Previously, 30 households in Dulagon had been electrified by Alina Enèji using Okra’s mesh-grid technology. The success of this pilot was met with follow-on demand to extend energy access to 300 additional households, both in Dulagon and its surrounding villages. Site surveys indicated that most households had minimal energy needs (approximately less than 200Wh/day), but there was also a substantial number of households with medium to high-energy needs. At the time, all households were relying on alternative fuels such as kerosene and diesel.

Alina Enèji opted to go for a “hub-&-spoke” implementation of the mesh-grid that enabled an average daily load of 440 Wh/day with 1.5 days battery autonomy. 63 kW of solar PV and 178 kWh of lithium storage were installed amongst clusters of interconnected households fitted with the Okra “Pod”: a system controller that redistributes excess energy between neighbouring households. Each household cluster consisted of varying combinations of these configurations (in order of lowest-to-highest energy demand):

The total project cost to energise a further 300 households via mesh-grids came out to be:

Funding for the project was given to Alina Enèji by the Off-Grid Electricity Fund (OGEF), managed by Bamboo Capital Partners. Regulatory support was given by the Haitian body Autorite Nationale de Regulation du Secteur de l’Energie (ANARSE).

The 300-household scale-up was installed over a period of 35 days by Alina Enèji’s field team. At the time of writing this case study, households were using an average of 302 Wh/day with some households using up to 1800Wh/day.

End consumers pay for energy via mobile money on a prepaid subscription model.

The continued use of productive power is also attributed to a financing scheme that provided productive-use appliances, such as freezers and rice cookers, to a number of households at the beginning of the project.

To support project O&M, Alina Enèji has been actively training local maintenance agents. Okra Solar is also actively building a local technical support team in Haiti to provide hands-on training and assistance. With 330 households now fully energised, Alina Enèji is in the process of shipping equipment to energise an additional 700 additional households in the Marchand Dessalines region using mesh-grids. This phased scale-up should be fully operational by early 2023. Looking beyond, Alina Enèji is aiming to further its energy access portfolio to rapidly serve an additional potential 100,000 households in Haiti. 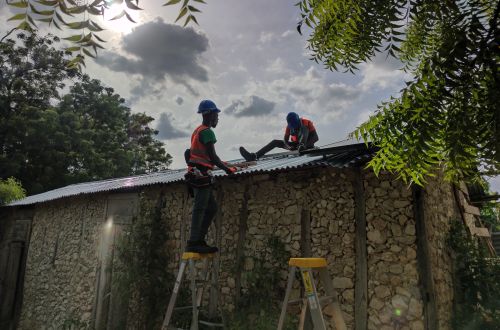