With the Support by Wision (an initiative of the Wuppertal Institute of Climate Change), the Instituto Internacional de Recursos Renovables A.C and the International Renewable Resources Institute (IRRI Mexico) – ran a project from 2014 to 2016 on removing barriers to greenhouse gas mitigation in medium-scale agricultural livestock activities in Mexico. Total budget was Euro 65,000.

IRRI fosters sustainable development at the cross-section of social justice and environmental sustainability, striving to foster low emission and highly resource-efficient households, farms and communities through holistic approaches to technology development, transfer and capacity-building. The work of IRRI is context-driven, gender responsive, participatory and fully transparent, taking traditional and indigenous knowledge into account together with ecotechnologies to help communities become more autonomous, resilient and able to protect their surrounding environment.

To improve the productive use of biogas from livestock waste on small and medium-sized farms in central Mexico by demonstrating various applications of biogas and adapting ‘off-the-shelf’ electric motors to run on biogas.

Biogas is widely promoted as a sustainable energy option for small and medium-sized farms. However, a limitation has been the ability of such farms to exploit biogas energy for mechanical and electrical uses. The most common application of biogas in the sector is often confined to covering thermal loads, such as those linked to cooking and hot water needs.

Biogas can be used to fuel small motors and provide mechanical and electrical power for the different productive processes on small and medium-sized farms, such as milking, pumping, grinding or chilling milk. While large scale biogas engines above 50 kW are a well-established technology, small biogas motors are not.

The specific objective of the project was to create an engine platform that could provide reliable mechanical and electrical power for small and medium-sized farms. The technical focus was on small gasoline engines available on the market and easily accessible to small and medium-sized producers, as well as on the development of appropriate technology for adapting these engines to run on biogas. The project comprised two main phases. In the first phase, four ‘Sistema Biobolsa’ biodigesters, waste water treatment systems and biogas use systems were installed at four medium-sized livestock farms (two pig farms and two dairy farms). Baseline data was collected on the volumes of livestock and waste production at each farm, as well as on energy use and opportunities for reusing the effluent nutrients as organic fertilizer. The biogas now being produced on these farms is used for space heating for pig maternity areas, for heating water for cleaning purposes, and as gas for cooking. In the second phase, the project adapted 20 small (5-10 kW) commercial gasoline motors available on the Mexican market so the farmers could produce mechanical and/ or electrical power from biogas. Of these motors, 16 were installed in existing small biogas plants and four in the new medium-sized demonstration plants, totalling 152 kW of new capacity. This phase included five significant areas of R&D: biogas filtration, matching energy production and use, motor sizing and design, grid interconnection, and training and maintenance.

The project applied a mixed financing approach. Grant funding from the WISIONS of Sustainability initiative provided an economic incentive to the farmers at the demonstration sites. The investment for the four waste water treatment systems was co-funded through the crowd-sourcing KIVA loan platform, with a small payback period of between 7 and 15 months. The research team and the biodigesters were financed by the USAID Mexico Low Emissions Development Program (MLED). 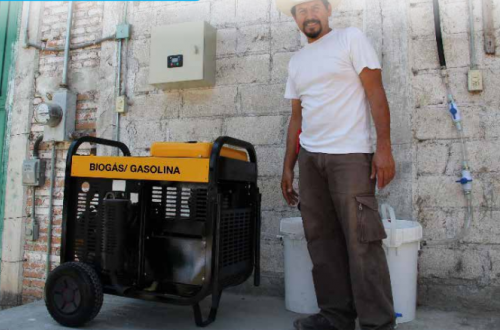