The Smart Grids Research Unit (SmartRUE) is a research group of the Institute of Communication and Computer Systems (ICCS) and it belongs to the Electric Energy Systems Laboratory (EESL) of the School of Electrical and Computer Engineering of the National Technical University of Athens (NTUA). The main activities of Smart RUE focus on research and technology development in the area of Smart Grids, mainly dealing with planning and operation of modern power systems characterised by high penetration of renewable energy sources, distributed generation and flexible loads, with the employment of advanced control and ICT technologies.

The Rural Electrification Research Group (RurERG.net) is part of the Smart RUE and a member organisation of the Wind Empowerment Association and the Hydro Empowerment Network. The RurERG is an interdisciplinary group of engineers developing open source hardware solutions for renewable energy microgeneration applications, including technologies such as small wind turbines, pico-hydro turbines, solar home systems and data logging devices.

The overall energy demand of the health clinic is approximately 1.5 kWh per day. Previously, the health clinic used a small freezing box with icepacks to store vaccines, with a periodic supply of ice packs that arrived from the closest city. The vaccines could only be used for a short period of time in the absence of a freezing system, so a basic vaccine freezing apparatus was an immediate requirement for the clinic. The clinic also had insufficient LED lighting from a very small SHS, therefore complete illumination of the clinic’s four rooms was neccesary. The successful development of the project was achieved through the communication of all partners in order to increase its long-term sustainability. A major challenge was communication barriers due to the remoteness of the village community and the need to coordinate between several international partners.

The project started with a two-day course on hybrid system design in Kathmandu, where a small wind turbine was designed using locally available materials, which then lead to a five-day construction course in cooperation with the Kathmandu University, during which the small wind turbine was built. The following week, the wind turbine was installed in Mityal on a 12-metre tower as part of a hybrid off-grid system, along with 600 Wp of solar panels, a 700 W inverter, a 24 V 200 Ah battery bank and a diversion load charge controller. The hybrid system provided electricity for mobile phone charging, lighting and a laptop computer in the ward offices, as well as refrigeration of vaccines and lighting in the local health post. A maintenance workshop was carried out on site with the participation of local community members, where all aspects of preemptive maintenance were explained, such as painting of the blades of the wind turbine and greasing the yaw hub, tail hinge and bearing hub.

The total cost of the project was EUR 9,000 and was funded through a grant from WISIONS. The system was handed over to the village ward, who owns the system and supplies the clinic with electricity free of charge. The ward is also responsible for the system’s maintenance requirements, along with the project partners’ support (i.e. assuring its technical and financial sustainability). The village ward makes monthly cost savings which are destined for future maintenance requirements and replacement of the system components.

Furthermore, its staff is in close communication with the local technical partners of the project, who provide maintenance services when required.

After the installation of the DRE system, the occasional use of diesel generators was reduced. The rural health clinic managed to sustain its operation and jobs (which include a doctor and a nurse), while also creating the job opportunities for two local electricians, trained by the project partners on the details of the DRE system to provide occasional O&M paid services. Additionally, the rural population of the area has benefited from improved access to health services, mostly due to the longer operating hours of the clinic thanks to of the newly introduced evening lighting, as well as the larger on-site capacity to store and distribute vaccines.

DRE hybrid systems using solar panels and locally manufactured small wind turbines have the potential to supply remote areas with a sustainable energy source, while strengthening local economies by providing energy for productive uses such as mobile phone charging and refrigeration. Such hybrid systems have also been successful in other projects conducted by RurERG, for example in rural areas of Ethiopia. Several hundreds of those systems have been installed on all continents by members of the Wind Empowerment Network, a global association active in more than 50 countries with the mission to deliver sustainable rural electrification through the local manufacturing of small wind turbines. 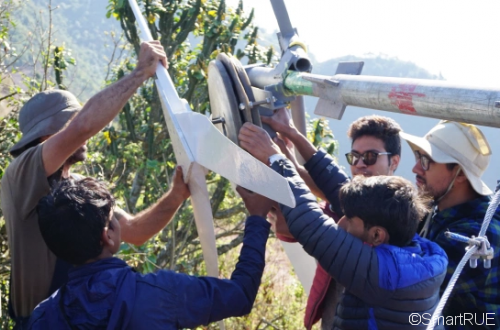