Rural communities in Malawi’s countryside often suffer from electricity blackouts, sometimes for up to 12 hours at a time, which makes the storage of vital medicines very difficult in those areas. In practice, people had to travel to regional hospitals because local clinics were unable to store vaccines, insulin, and other basic medicines. To solve this problem, Resolve designed, built and installed 239 pharmaceutical dispensaries across Malawi’s rural countryside for the compliant storage of medicines, 117 of which were deployed in underdeveloped areas with no access to the central power grid. A DRE solution to provide these critical pharmaceutical storage units with electricity and cooling systems, independently of any centralised power system, was key to the success of the overall project. Now, after the installation of the DRE solutions, local health care facilities can store medicines closer to where they are needed and the inhabitants of rural communities do not need to travel long distances to access vital medicines anymore. The average energy demand of the health care facilities varies between 5 and 10 kWp.

A typical system for the larger of the two types of buildings (a 75 m2 unit) consisted of:

This was to drive two 12,000 BTU air conditioners on permanent 12-hour rotation cycles, as well as internal and external lighting. The solar panels were deployed as a roof-top system fixed to an aluminum subframe. The units have a dedicated ‘power room’ which contains all cables, inverters and batteries. The power room also has its own ventilation to remove excess heat. The entire unit, including solar system, is connected via various IoT sensors to the internet, monitored centrally by the customer’s control room. Following the completion of an installation at each site, training and orientation is provided to the end-users at the health care facility. The end-users for this orientation are the pharmacy staff, the head of the health care facility and the maintenance staff of the health care facility. The staff are oriented, at the time of handover, on the correct use of the following items: air conditioner units, PV system, electrical components (i.e. distribution board switches, change-over switch, automatic voltage regulators, surge protection, lights, etc.).

In addition to the orientation on the correct usage of the equipment to health care staff, the maintenance staff received further training on procedures for routine maintenance of the prefabricated storage units and associated equipment. A manual on all aspects of the O&M of the site was finally handed over to all facility managers.

The total cost of the project was EUR 14.7 million, of which 100% were donor grants by USAID and UKAID. The system is owned by the MoH. The long-term sustainability of the project is ensured through a two-year post-implementation maintenance service level agreement (managed by Resolve) training and orientation for end-users.

The project improved access to health care in rural communities through the provision of a DRE system to increase the ability of local health care facilities, serving 17.6 million people, to also store temperature sensitive medicines such as vaccines, insulin, chemotherapy drugs, topical preparations and some types of eye drops. Additionally, the project allowed for some unintended extra benefits by providing a place for the medical staff and the communities to recharge their cell phones and maintain communication.

The largest obstacles Resolve had to overcome were a combination of tight timelines (six months to deploy all infrastructure), rainy season, treacherous rural road infrastructure and last-minute synchronisation of 20 construction teams with on-site arrival of construction material. Each ‘construction round’ timed the deployment of 20 units within eight days. The solution can be replicated across Africa, where Resolve estimates that there is a 70% shortage of compliant medicine storage facilities in the continent, based on discussions with the MoH in Uganda, Tanzania, Ethiopia, Mali, Zambia, Angola, Democratic Republic of the Congo, Nigeria, etc. 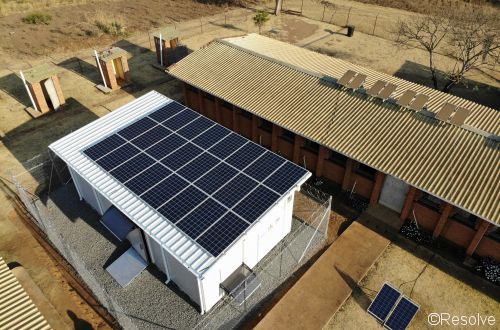