Mascara Renewable Water is a company specialised in innovative membranes water treatment solutions with the use of renewable energy.

The company developed the world's first reverse osmosis desalination technology coupled with photovoltaic solar energy, without battery nor grid regulation, to produce 10 - 5,000 m3 per day of fresh water at a competitive price to any remote location.

The island of Rodrigues is suffering from recurring droughts and natural water resources and rainfall harvesting does not supply sufficient water for the 40,000 inhabitants. The island authorities started a desalination programme a few years back, which has a significant energy consumption, leading to high operating cost, and greenhouse gas emissions. The water supply challenge of this remote challenge remained hence unanswered by fuel powered desalination.

The project was financed as a pilot by the Indian Ocean Commission through European Funding, the French Fund for the World’s Environment and the Rodrigues Regional Assemby through call for proposal for innovative solutions for water supply.

The first solar powered desalination unit of the Indian Ocean is supplying over 300m3 per day using both the solar powered during daytime and low rate grid electricity at night, to supply local inhabitants.

When the cyclone Joaninha passed north of Rodrigues' Island, in the Indian Ocean, in March 2019, causing serious material damage and a major power outage. The desalination plant, OSMOSUN®  powered by solar energy, has resumed operation just a few hours after the fierce cyclone Joaninha passed close to the island. Whereas the electrical network resumed service within a few days to weeks, the inhabitants' drinking water supply is guaranteed thanks to Mascara Renewable Water solar desalination plant.

This resilient solution has demonstrated the potential for solar powered desalination to address the Rodrigues island's water challenge and is to be replicated in many island states throughout the Indian Ocean, the Caribbean and the Pacific countries.

A further integration of the OSMOSUN® as the key component of a water-energy nexus for an integrated water system for grid regulation is also under development for Rodrigues Island to further showcase innovation toward 100% renewable powered islands. 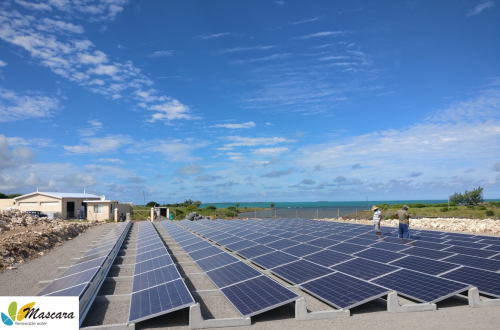